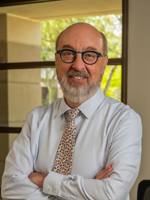 Dr. Alexander is the Chief Scientific Officer of Alzheimer's Prevention Initiative, led by Banner Alzheimer's Institute. Previously he was VP in the neuroscience therapeutic area unit at Takeda. Prior to that, he worked for Pfizer as VP and head of clinical for the neuroscience and pain research unit, AstraZeneca where he was VP of clinical for CNS and the pain innovative medicines unit (iMed). His other prior positions include VP and head of discovery medicine and CMO of the Neurosciences Centre for Excellence in Drug Discovery at GlaxoSmithKline and senior director in the clinical neuroscience and clinical pharmacology at Merck Research Labs.

Dr. Alexander received his undergraduate and medical degrees from the University of Chicago, completed an internship in Internal Medicine at the New England Deaconess and a residency in Adult Psychiatry at McLean Hospital/Harvard Medical School. Following residency, he was a fellow in the Neuropsychiatry Branch of National Institute of Mental Health (NIMH) and then at Columbia University (in Medical Genetics).

In recent years, Dr. Alexander has focused on neurodegeneration, both Alzheimer’s and  Parkinson’s disease, and was the medical leader of the team at AstraZeneca that developed the beta-secretase inhibitor that delivered the phase 1 package and started phase 2/3 in only 21 months – the fastest development time in the class. Since then he guided the early clinical development of a number of treatments targeted toward AD and other neurodegenerative disorders, including small molecules, antibodies, antisense oligomers and gene therapies. He has extensive experience in both early- and late-stage drug development and medical governance.